Download the catalogue
Representing Belgium with 2 Olympiad birds in Poznan In 2019 Erik had two pigeons at his loft who represented Belgium in the Poznan Olympiad. It was ‘Barcelona Triple 5’ and ‘Kleine Olympiade’, who were good for winning several National and Provincial Championship Titles in 2019. They became 1. and 2. Nat. Olympiad bird Pozan Cat. E. 2019. Especially the results of ‘Barcelona Triple 5’ were spectacular. In 2017 the bird was named ‘Barcelona’ after winning 5. National Barcelona against 7.874 birds. In 2018 he was basketed again on Barcelona and once more was winner of 5. National against 7.441 birds. Being a true winner, Erik decided to basket this super bird again on Perpignan. ‘Barcelona’ didn’t let him down and won 5. National against 3.966 birds. From that moment the name of this legendary racer was changed into ‘Barcelona Triple 5’. The golden bloodlines of De Rauw-Sablon, Marcel Aelbrecht and Jef de Ridder Over the years Erik continued to search for top class pigeons. Since he started in pigeon racing he has great confidence in the bloodlines of Jef de Ridder (St. Ulriks Kapelle), De Rauw-Sablon (Lebbeke) and Marcel Aelbrecht (Lebbeke). After the total auction in 2015 he continued with the youngsters from his base pigeons, he relied on the bloodlines that proved to be successful in the past. His pigeons didn’t let him down. In no time he returned to the top of the result lists. Also, the acquisition of the phenomenal ‘Roeper 593’ turned out to be a great success. His descendants brought the performances on the Middle- and Long-distance races to a higher level. With so many talented breeders at his loft, a cross breeding product of the noble bloodlines of Black Magic, Lucky 848, Remy, Blue Ace, Magic 092, Lucky 85, Iron Lady, Eagle Eye, Gilbert, etc. we are convinced that with the 2020 youngsters another successful new generation of Limbourg pigeons is born!  Now is the time to give fanciers world-wide a chance to reinforce their breeding loft with some of Erik’s exceptional pigeons. All National acebirds, National winners and Olympiad birds will be sold exclusively on European Pigeon Website!
Auction start: December 13. 2020 Auction end: December 19. – 20. 2020 and December 26. – 27. 2020 Visit our website: www.epw-eu.com 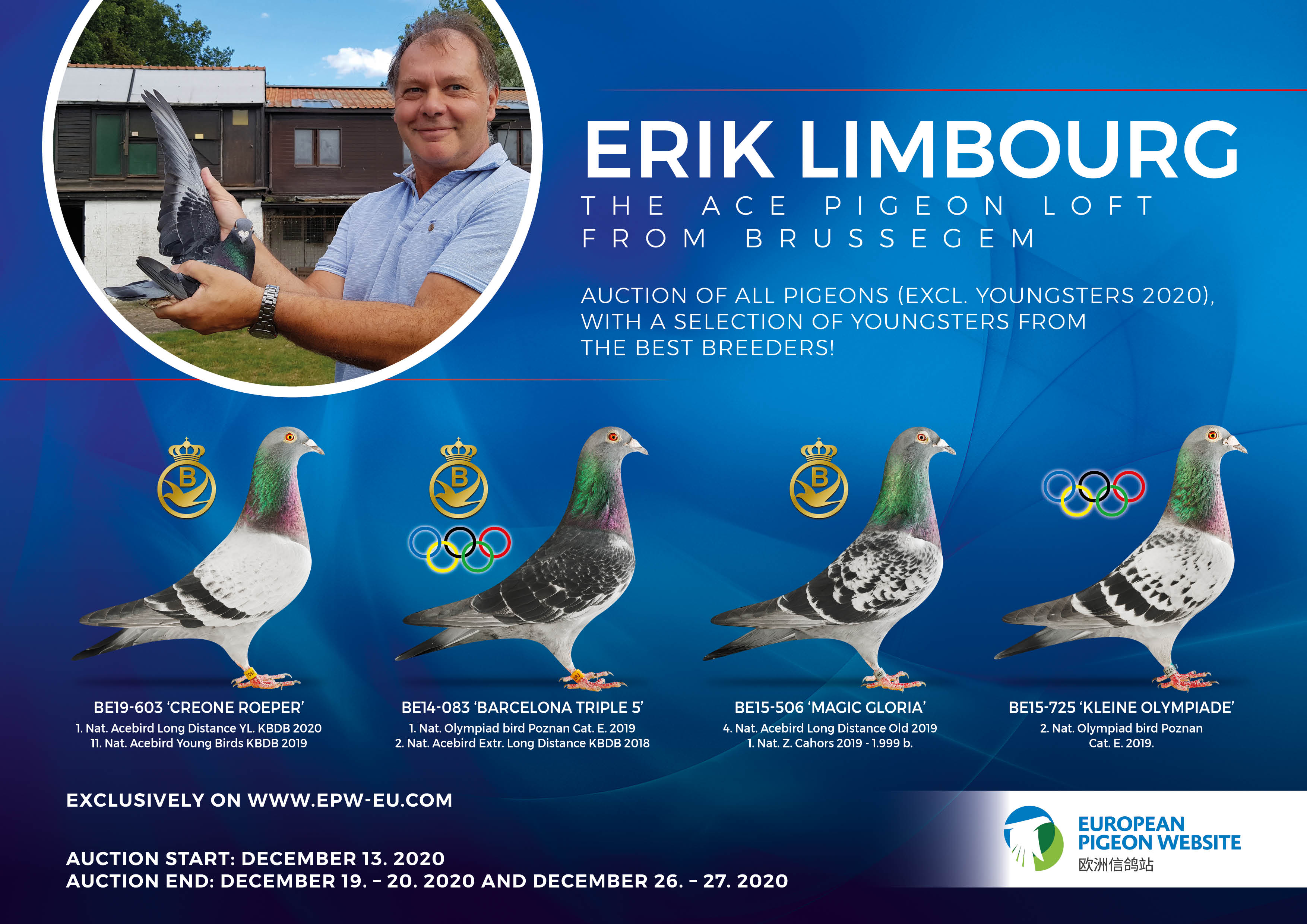 Receive the latest news on our upcoming auctions, subscribe to our newsletter!